Rockcastle Regional weans nearly 45 percent of the residents it admits, and the time from admission to discharge is getting shorter. Veronica Rains is one of those success stories.

If there is a chance residents of Rockcastle Regional can be weaned from the ventilator, preparation for their departure from the hospital starts from day one.

Veronica Rains arrived April 25 of this year in poor condition, weakened by bouts with pneumonia while in a critical care unit at another facility. She was bedfast and on a feeding tube.

When she was discharged on July 12, she not only 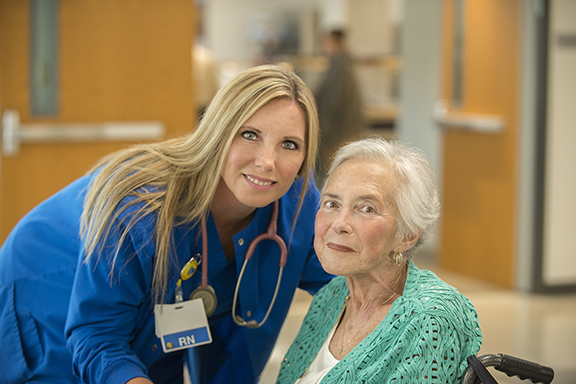 was breathing on her own, she was smiling, talking, and walking up to 200 steps at a time.

“I’ve been blessed,” she said while visiting caregivers she’d come to know as friends in September. “I really have.”

What happened in between occurs every day for Rockcastle Regional but is unknown to most.

Veronica and her husband, Jim, live a little more than an hour away but did not know about the 143-bed facility, the largest of its kind in the nation.

“If you haven’t had a family member there, you wouldn’t have any idea,” Jim said. “It’s an outstanding thing to have in Southeastern Kentucky. I was surprised at the size of the place, the care, the way they just made her feel special.”

Rockcastle Regional weans nearly 45 percent of the residents it admits, and the time from admission to discharge is getting shorter.

“We’re weaning people faster than we ever have,” said Stephen A. Estes, Rockcastle Regional president and CEO. “And every time we get a resident off the ventilator, that’s a fantastic success story.”

The measures taken to help residents wean is what sets Rockcastle Regional apart from most similar facilities, according to Jeff Smithern, director of respiratory care. “We take it in small steps, and it starts as soon as they come in the door.”

Residents are given a thorough evaluation upon admission, and an individualized plan is put in place. A multi-disciplinary healthcare team works with residents daily. Respiratory therapists employ inspiratory muscle training, which consists of breathing exercises that aim to strengthen the body’s respiratory muscles. They also conduct studies to measure oxygen, pH, and carbon dioxide levels in the bloodstream.

Physical and occupational therapy, as well as dietary counseling and speech therapy, play major roles in helping residents restore the strength and functionality necessary to be weaned.

“We were very pleased with her recovery process,” Jim said. He noted the importance of the facility’s rehabilitation services, which began at her bedside and soon moved to the hospital’s state-of-the-art, 2,300-square-foot rehabilitation room.

The Rockcastle healthcare team worked closely with her as she utilized an exercise bicycle, a stepper, parallel bars, and other equipment to help her gain strength.

Of course, it took more than equipment and a highly trained 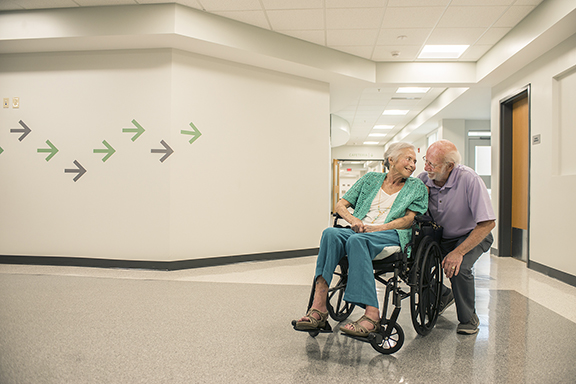 staff. Veronica was intent on improving and resolved to get back her strength.

And she did. Though still in a wheelchair much of the time, she’s strong enough now to go to church, to go to dinner, to get “out and about” with Jim, who is always by her side. The couple, both retired educators who will have been married 50 years next May, are even planning a Florida vacation.

They credit prayers, support from friends and family, and Rockcastle Regional for being able to look optimistically to the future.