Understanding the Colon and Rectum

The colon (also called the large intestine or large bowel) is a muscular tube that forms the last part of the digestive tract. It absorbs water and stores food waste. The colon is about 4 to 6 feet long. The rectum is the last 6 inches of the colon. The colon and rectum have a smooth lining composed of millions of cells. Changes in these cells can lead to growths in the colon that can become cancerous and should be removed.

When the colon lining changes 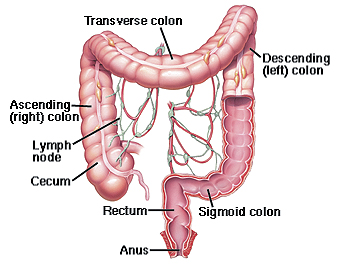 Changes that occur in the cells that line the colon or rectum can lead to growths called polyps. Over a period of years, polyps can turn cancerous. Removing polyps early may prevent cancer from ever forming.

Polyps are fleshy clumps of tissue that form on the lining of the colon or rectum. Small polyps are usually benign (not cancerous). However, over time, cells in a polyp can change and become cancerous. The larger a polyp grows, the more likely this is to happen. Also, certain types of polyps known as adenomatous polyps are considered premalignant. This means that they will almost always become cancerous if they're not removed.

Colorectal cancers usually start when polyp cells begin growing abnormally. As a cancerous tumor grows, it may involve more and more of the colon or rectum. In time, cancer can also grow beyond the colon or rectum and spread to nearby organs or to glands called lymph nodes. The cells can also travel to other parts of the body. This is known as metastasis. The earlier a cancerous tumor is removed, the better the chance of preventing its spread.

You and your healthcare provider will discuss a treatment plan that's best for your needs.

Surgery is often done to remove the cancerous parts of the colon and rectum. Some surrounding tissue is removed as well, possibly including nearby lymph nodes.

Chemotherapy may be done in addition to surgery. This therapy uses medications to attack cancer cells. It is considered systemic therapy because it works throughout the body. It's usually done as an outpatient procedure in a doctor's office, clinic, or hospital. You may receive the medication in pill form or through an IV line or infusion pump (a device that slowly releases medication into your bloodstream).

Radiation therapy may be done for rectal cancer. This treatment uses high-energy x-rays to kill cancer cells. It's considered localized therapy because it targets the specific area of the body affected by the cancer. It is usually performed on an outpatient basis in a hospital or radiation clinic.

What is screening, and why is it important?

Screening is checking for health problems before they cause symptoms. Colorectal cancer screening can detect cancer; polyps; nonpolypoid lesions, which are flat or slightly depressed areas of abnormal cell growth; and other conditions. Nonpolypoid lesions occur less often than polyps, but they can also develop into colorectal cancer.

If colorectal cancer screening reveals a problem, diagnosis and treatment can occur promptly. In addition, finding and removing polyps or other areas of abnormal cell growth may be one of the most effective ways to prevent colorectal cancer development. Also, colorectal cancer is generally more treatable when it is found early, before it has had a chance to spread.

Insurance coverage varies. People should check with their health insurance provider to determine their colorectal cancer screening benefits. Because virtual colonoscopy is a fairly new procedure, reimbursement policies may be more uncertain than for other types of screening. Medicare covers several colorectal cancer screening tests for its beneficiaries. Specific information about Medicare benefits is available on the Medicare Web site at http://www.medicare.gov/health/overview.asp on the Internet.

What happens if a colorectal cancer screening test shows an abnormality?

If a screening test finds an abnormality, the health care provider will perform a physical exam and evaluate the person's personal and family medical history. Additional tests may be ordered. These tests may include x-rays of the gastrointestinal tract, sigmoidoscopy, or, most often, colonoscopy. The health care provider may also order a blood test called a CEA assay to measure carcinoembryonic antigen, a protein that is sometimes detected in greater amounts in patients with colorectal cancer. If an abnormality is found during a sigmoidoscopy, a biopsy or polypectomy may be performed during the test, and a colonoscopy may be recommended. If an abnormality is found during a standard colonoscopy, a biopsy or polypectomy is performed to determine whether cancer is present. If an abnormality is detected during virtual colonoscopy, most patients would be referred for a standard colonoscopy the same day.