It isn’t often that you’ll find a long-term ventilator care unit and a child development center housed in the same building, but that’s the case at Rockcastle Regional Hospital, and it leads to some fun days for two special groups of people. 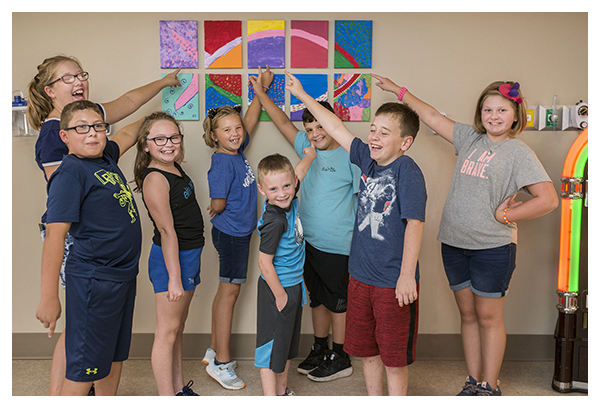 Take the summer of 2019, for example. Rockcastle Regional Child Development Center Director Twila Burdette and occupational therapist Erin King came up with the idea of an art collaboration.

One afternoon, nine school-aged children, mostly kids of employees, and about 11 residents came together and went to work. They formed small groups, spread out painting supplies, and began planning color schemes: blue with orange, yellow with pink, browns with purples. They alternately chatted and concentrated and laughed and focused.

Some of the residents were unable to use their hands due to their medical condition. In those cases, the kids did the painting while the residents chose the colors.

“Some of them really became big buddies,” Burdette said. It was educational for the kids. “It taught them patience and that not all people communicate the same way,” she said.

In the end, after about an hour and a half, they were finished with their paintings. Each was part of a larger pattern that, when put together, formed a beautiful mosaic that was hung on the wall of the resident dining area.

As for the residents, the project gave them a chance to feel young again, and who knows, they might have passed on a little wisdom to the younger ones.

“It was a good example of two groups of people who didn’t know each other before, working together to make a final product. It was a fun day.” Burdette, who worked in activities for the respiratory care center before becoming director of the child development center, also known as the York House, has always recognized the synergy between the two groups. Several times a year, the kids engage in an activity involving the residents, be it Christmas caroling, a Halloween parade, or something more hands-on like the art project.

Jason Amyx, activities director for the respiratory care center, has noticed how the residents enjoy such days.

“A lot of the time, residents have grandkids but rarely get to see them,” he said. “When they do these activities with the York House kids, you’ll see their faces just light up.”